Since sharing her story below in 2018 Alex Johnson has continued to climb the ranks in the fire and rescue sector and is now the Deputy Chief Fire Officer at South Yorkshire Fire & Rescue Service. She continues to do some wonderful work with Women in the Fire Service to encourage and support other women in the sector. Here she is sharing her thoughts on work life balance, believing in yourself and women supporting each other. Thank you Alex!

We’d like to introduce you to Alex Johnson, Assistant Chief Fire Officer, South Yorkshire Fire & Rescue Service. She’s a real inspiration for women in the fire service and beyond. We’ve been fortunate enough to have crossed paths with Alex on several occasions and continue to be inspired by her down to earth approach and passion for supporting other women. 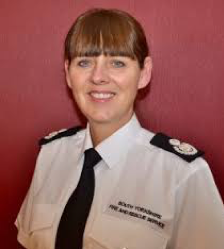 “I joined Derbyshire Fire & Rescue Service in May 1992 at the age of 24. I never saw another female firefighter from one month to the next there were so few of us. I think it was fair to say the Fire Service wasn’t ready for women at this point; no female facilities on station, no female uniform or PPE (Personal Protective Equipment) and certainly a culture that wasn’t generally ready to accept women readily.

My first posting to Blue watch, Ilkeston was excellent, I had a great Sub Officer (Watch Manager now), he was strict but fair and my probation period went without any problems. I felt supported and part of a team. I then moved to another watch where life was very different. Looking back I was bullied and sexually harassed and I very nearly resigned at one point. So what made me carry on? My love of the job and the knowledge that not everyone held the same beliefs and attitudes as those that were making me miserable. In 1994 I attended my first Women in the Fire Service Conference and also the FBU (Fire Brigades Union) women’s school. These events were a turning point for me. I found other women who had had similar experiences to me, it gave me a support network from across the whole of the UK. I also met women who held rank and it made me realise that I could either conform or I could make things change for the better for both men and women in the service.

I started to go for promotions, not always successful first time but then who is?! Gaining promotion requires hard work, but it’s worth it and I have certainly found the higher I get in the organisation the more I can influence change, however change can be influenced by everyone in the organisation.

So what advice would I give to others? Be yourself and believe in yourself. Of course some people may not want you to get on, but when I look back, I’ve held myself back as much as anyone else has. Don’t think you have to have done everything or ticked all the boxes. You will learn as you go along. Get a mentor, someone you can have honest conversations with and who can offer you support.

Attend events aimed at women, be proud to attend, don’t apologise! Start your own women’s group. It’s not just for women who have experienced problems it’s for women to come together, support each other and share experiences both good and bad. If you do get promoted, don’t pull the ladder up! Leave it down for others to climb, there’s plenty of room at the top!”