We are delighted to introduce you to another, incredibly inspiring woman…here’s Jacquetta’s story… 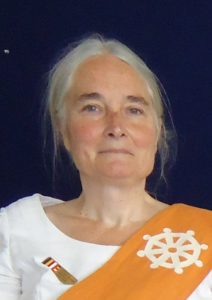 She was included in Burkes’s Landed Gentry, Volume III, England’s Northwest including Contemporary People of Distinction(1996) as a Contemporary Person of Distinction in recognition of her religious work. The Mayor of Kendal requested that a Pali Buddhist Blessing Ceremony be conducted for the Mayor’s Parlour in Kendal Town Hall to celebrate this achievement. An Osmanthus Burkwoodii bush was planted in the Multifaith Memorial Garden at Kendal Unitarian Chapel to commemorate this event.

Venerable Narada Maha Thera gave her the Five Precepts in Sri Lanka 40 years ago in July 1975. She was authorized to teach by Venerable Balangoda Ananda Maitreya Mahanayaka Thera in 1983 and by Venerable Hammalawa Saddhatissa Maha Thera Chief Sangha Nayaka of the UK and Europe in 1984.

She has given many talks on women in Buddhism including at The London Buddhist Vihara the oldest Theravada Buddhist Vihara in the UK. She is a founder of BGKT Buddhist Group of Kendal (Theravada).

In August 1994 during a visit to London, Venerable Balangoda Ananda Maitreya Mahanayaka Thera Abhidhaja Maharatthaguru Aggamaha Pandita DLitt DLitt (1896-1998) gave her the Bodhicari Precepts which were developed at Dharma Vijaya Buddhist Vihara in Los Angeles. As far as we are aware, she was the first person to take the BodhicariPrecepts outside the USA. The Bodhicari Precepts permit the holding of Chaplaincies. She decided that she would be interested if an appropriate Chaplaincy role arose.

She was included in a list of eminent First Women by Carrie de Silva.

She is a Member of WFS UK Women in the Fire Service UK.

She was one of the founders of Faith and Fire.

Jacquetta Gomes spoke on Faith and Fire, at the Building a Bridge Through Spiritual FriendshipConference of Buddhist Chaplains from the UK and US, held at Balliol College, Oxford University in March 2014.

BEWES Buddhists Engaged with Emergency Services is an informal group which facilitates contact between Buddhists (advisors, chaplains, mindfulness teachers, volunteers, etc.) working with, or who have worked with the emergency services and related organizations.

What strengths or personal attributes do you think have really helped you to succeed?

“Buddhism, determination, mindfulness, persistence, respect and caring for others, sense of humour, sense of self-worth, a thick skin and wonderful support from others.”

How have you managed set backs / challenges along the way?

“I see challenges as opportunities.”

“I do not give up at the first set back in any situation. I see setbacks as often advantageous in the long run as these lead to patient reflection. Setbacks have prevented me from rushing into situations which were not right for me. As one door closes another door opens, often leading to a better and more appropriate opportunity.”

What is your formula / top tips for a successful work / life balance?

“A private life is as important as a work life.”

“Nobody dies wishing they had spent more time in the office.”

“Learn to relax possibly through mindfulness, meditation, or yoga.”

“Remember social media has an off switch.”

“Sleep and good food are important.”

What advice would you give to a woman looking looking to manage her career/working life?

“You are not perfect and cannot succeed at everything. Failures and mistakes are part of life. Be kind to others and remember they are also not perfect and accept they also make mistakes.”

“You are part of a team with your colleagues. Understand the difference between colleagues, acquaintances and friends. Do not give out or ask for too much personal information in inappropriate situations.”

“Do not take yourself too seriously. Value yourself and your achievements but do not criticize others efforts.”

“Accept relevant opportunities when they come. These may not be offered again.”

“Problems and issues which can seem huge at one point in time can seem trivial with the perspective offered by the passage of time.”

“Support other women and allow them to support you. Join women’s networking groups like Women in the Fire Service.”